If you haven’t seen “The Greatest Showman” yet, then you have missed out. I urge you to see it, for many reasons. You might not like musicals but this is a film where the musical and film genre meld perfectly together. The choreography and music is modern and the way that the choreography and filming is done is amazing. But it has a moral that all of us can learn from. It can also show you how to stay true to how you are, and why that is important.

One of the best songs from the show is called “This Is Me” and it is sung by a group of misfits and circus performers who have been labelled as ‘freaks’ and ‘outcasts’ by the Victorian society they live in.

In the film, Phineas T Barnum accepts them for who they are and brings them all together in his circus, offering them a chance of a livelihood, albeit initially, as ‘objects of curiosity’ for their more ‘socially-acceptable’ counterparts in society.

However, what happens is that this group of ‘misfits’ finally start to believe that they have something to give, and as their audience numbers and appreciation for their talent grows, so to does their confidence and self-esteem.

When they are later rejected cruelly from entering a party for the cream of the aristocracy, their disappointment turns to determination, and the song is sung beautifully by Keala Settle & The Greatest Showman Ensemble.  If you’ve not seen it, then watch the official video below.

Why Does It Matter?

The song is a great anthem to accepting yourself for who you are. It is a rousing chorus which stirs the blood and I defy anyone to listen to it without feeling proud of who they are ‘warts and all’ as the saying goes.

What is so excellent about this song is the way that it leads you to an understanding that even if you are different from other people, or don’t fit into the conventional boxes of ‘normality’ or what others deem ‘acceptable, you are still a valid and amazing person, just as you are.

And speaking frankly, who really wants to fit into those ‘normal’ boxes anyway?!

I recently went to a football match with my girls (aged 10 and 12) since the town we live in has built a new football stadium for the local football team. I’m not particularly into football but we went to the opening of the stadium to see what it was like and to join in the fun of the opening game. 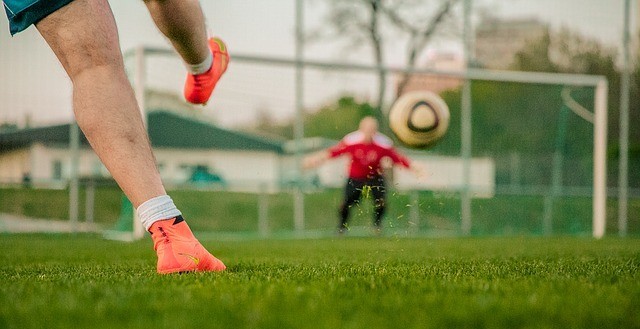 Now I may not be into football in a big way, but what I am into, is being who you are. And therefore when I go to a football match (this was only my second one, ever) I’m going to cheer them on. And that’s just what I did. A 52-year-old woman cheering on a team she’d never followed before, just for the hell of it. And you know what, it was great fun.

My children were mortally embarrassed obviously, but since I’m trying to lead by example, their pleas of ‘mum, stop shouting’ were like water of a duck’s back. I was doing what I felt was right, cheering on the team, without the slightest thought about whether the people around me thought of me. I was polite, I was energetic.  I was me!

Now I don’t tell you this story to prove what an inconsiderate mum I am. No, I tell you this because I honestly believe that if you can stay true to who you are, as a person, you will live a happier life.

Why “This is Me” should be your own anthem 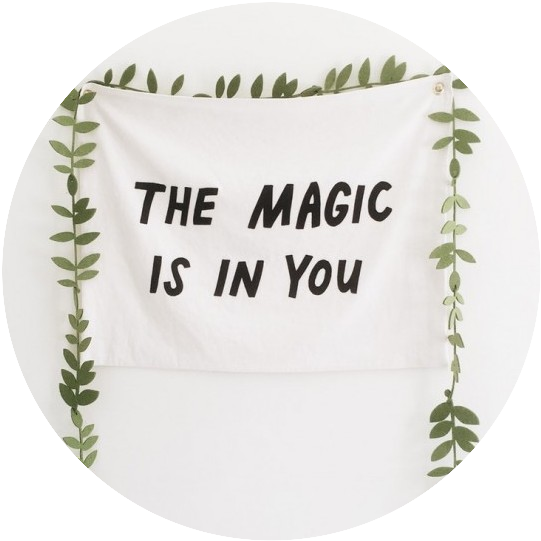 And by the same token, it is your job, and your job alone, to make yourself happy.

If you are constantly worried about what other people will think of you, then you will be trying to please them, and not yourself, and that will mean that you will either:

Now I’m not talking here about doing things that are illegal, immoral or that would cause general offense here. I’m merely talking about having pride in who you are and what you are – whoever and whatever that is.

Have Pride In Yourself

It’s been Gay Pride this week in London in the UK, where members of the LGBT+ community take to the streets to show that there is nothing to be ashamed of from having a different sexuality or gender identity to the majority of people.  In fact, it is something to be pround of. 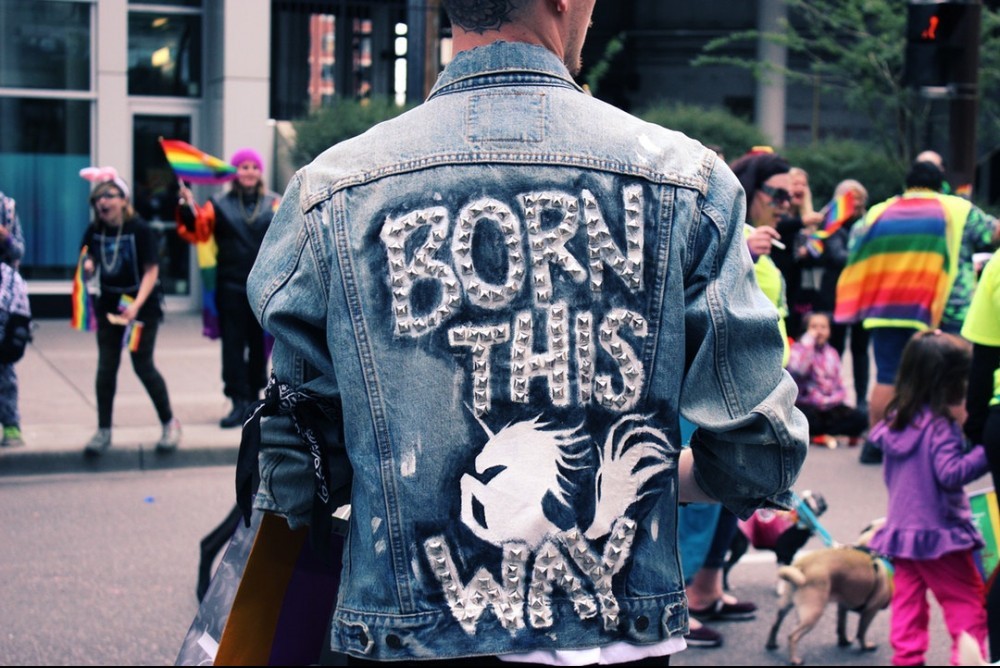 I’m not Gay myself but I fully support the rights of anyone, anywhere, to decide who they are for themselves, free from oppression, fear and persecution. Being in the performing arts business, I have many friends who are Gay since this industry is by comparison, very accepting of homosexuality generally.

I also have a transgender relative. Luckily for me, these people are all proud and well-adjusted people who have learned that the “This is me” anthem, is one that is truly the only way to happiness.

Being proud of yourself is crucial to avoiding a life time of disapointment and regret. You cannot live your life for someone else, only YOU. When you understand that, you can take back you power and start to build the life YOU dream of, unencumbered by your thoughts of inadequacy or doubt.

There’s another great song in the same vein from the musical “Les Cages Aux Folles” about the Gay owners of a drag club in Saint Tropez when their son brings his fiance’s parents to meet them. It’s called “I Am What I Am” and is sung with the same determination and self-belief as “This is Me“.

I love both of these songs and they are definitely on my ‘go to’ list when I start to doubt myself of feel that I am letting other people’s opinions become more important than my own.

What’s interesting from a law of attraction perspective, is that having pride in yourself and setting your attraction point to this emotion, will bring more of the same; therefore more feelings of belonging, self-confidence and self-esteem.

When you succumb to the illusion that the rest of the world’s opinion of you is who you are, you are on the first step on the slippery slope down to self-doubt, disappointment and misery.

So what can you do if you find that other’s don’t accept you?

Here are a few suggestions:

1. Recognise that who you are is an important, amazing human being with as much right to be as happy and accepted as the next person. The universe does not exclude anyone or anything – there is no law of rejection – only the law of attraction. The universe is based on unconditional love and as such, is a tolerant, accepting place, without judgment or punishment. It simply reflects back to you what you offer It does not offer value judgments however much we might want it to.

Mankind is the only species that adds value judgments to things, and those are usually born out of a lack of understanding or a desire to force other people to behave in a certain way that the people in power find acceptable – it is a way of controlling people, not empowering people, but it comes from humans, not from God or the universe.

2. Understand that if you let the opinion of others limit you, then you will not be living your own life, but someone else’s. They do not have your goals and dreams; they have their own goals and dreams and their own ideas of what you should, or should not be doing. But don’t be drawn into their way of thinking because it will not lead to your own happiness. 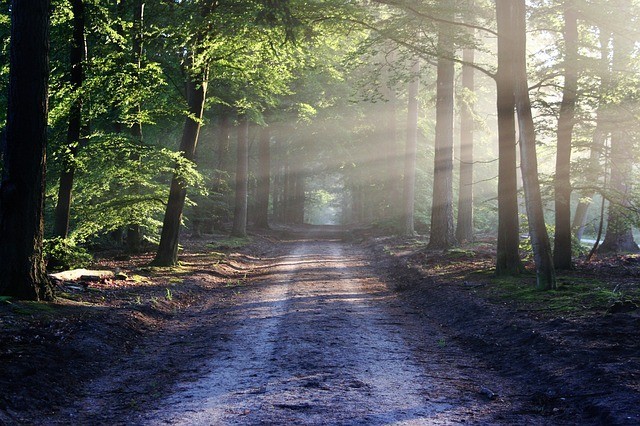 If they are people you love (and often they are e.g. parent’s and  friends), then understand that it is OK to be on a different path than they are. You can acknowledge their opinion, you can respect their opinion, but you do not need to take it on as your own. Know the difference and be strong with your own ideas of self-identity. YOU are the only person with you from the day you are born to the day you die – you MUST be true to yourself as it is why you came here in the first place. 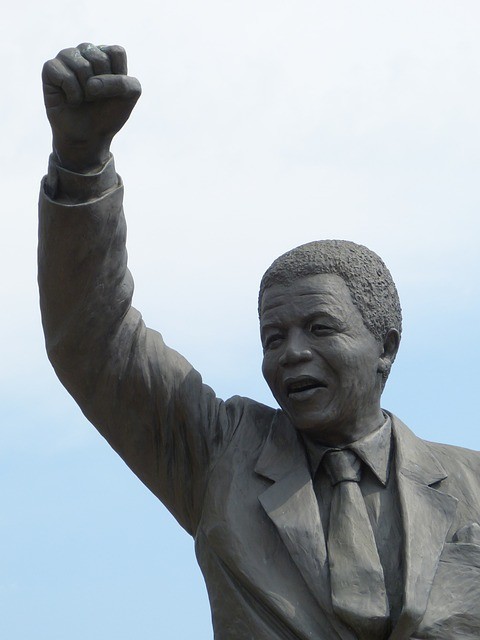 And having that, meant that they could go on to help millions.

So I urge you today, to have a “This is Me” attitude when you face the world. I’m not saying it will all be plain sailing, but ultimately you will find peace with who you are, and there is nothing more important than that.

In the musical, “Oklahoma”, Aunt Eller stops the fight at the picnic between the farmers and the cowmen with a shot from her shotgun. She then berates them for not accepting each other’s differences, and finally sings these immortal words: 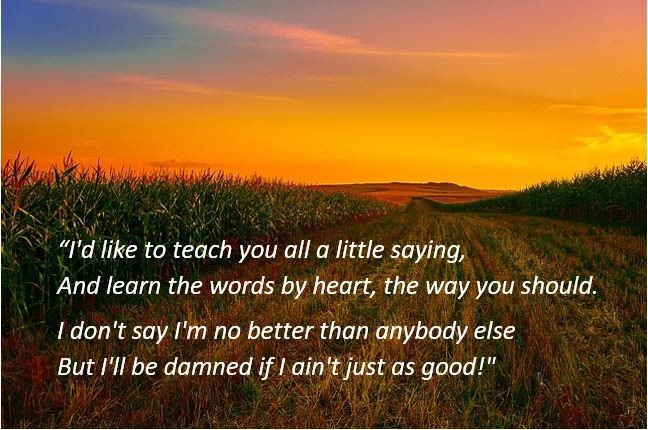 And who said that musicals were just ‘frivolous nonsense’?!

Have a wonderful day.

How to not care what other people think about you

Failed? Don’t beat yourself up: Be kind to yourself

Dance as though no one is watching you

I believe in you